This Japanese maple celebrates fall, having survived summer on the north side of the house.

The Japanese maple near my front door was flaunting its brilliant scarlet leaves last fall when a neighbor stopped to admire it and to tell a tale of woe: She had lost a Japanese maple — one for which she had paid more than $1,000.

It took only a moment for me to learn that a dutiful worker had planted it where she directed, and that she hadn’t realized that Japanese maples need protection from our brutal Texas sun. The ‘Bloodgood’ maple she was now admiring has thrived for 20 years on the north side of my house — where there is “mostly shade,” I explained.

I was tempted to lead a tour of my backyard Japanese maples (also in full color at the time), but I elected merely to elaborate on how these lovely small trees (Acer palmatum) are “understory trees.” Two others have graced my garden for years — one planted under a large shade tree and another located on the east side of the house, where it gets morning sun but afternoon shade. (That nameless maple was a $9 bargain at a nondescript nursery but is now fully grown and a delight outside a family-room window.) 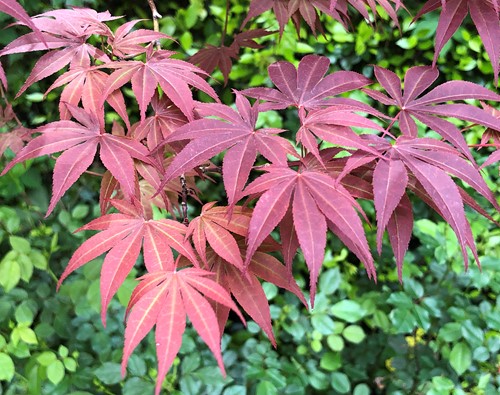 Well-protected leaves of Japanese maple can be equally beautiful in spring.

Plant tags for Japanese maples often say “USDA Zones 5-8” and suggest “filtered sun, full sun, partial sun,” but those tags tell us very little about the microclimates in which the trees will thrive. It’s obvious to all of us that there is a difference between the “urban heat island” of a nearby tollway and the much-cooler neighborhood park — but it takes dedicated effort in our gardens to learn all the ins and outs of smaller-scale microclimates.

The noted garden writer Barbara Damrosch has said, “Good gardening is very simple, really. You just have to learn to think like a plant.” That’s a way of urging us to discover microclimate details — how high and low areas of our gardens will drain differently, how cool or warm air sinks or rises, how rocks, driveways, walls and other structures reflect heat, how wind acts as a thief of moisture or a battering ram — and how all these details make some plants happy and others forlorn.

My favorite arborist was surveying my trees a while back when he exclaimed, “That’s the biggest Texas mountain laurel I’ve ever seen in North Texas!” I would have taken credit for exceptional horticultural skills, but I knew the specimen’s location was pretty much pure accident. When choosing a planting spot two decades ago, I had done just enough homework to know that the tempting red seeds of mountain laurel are poisonous (and hallucinogenic), so I located the young native plant near my alleyway drive, beyond the backyard fence. The grandkids were young, and it needed to be outside their play area. 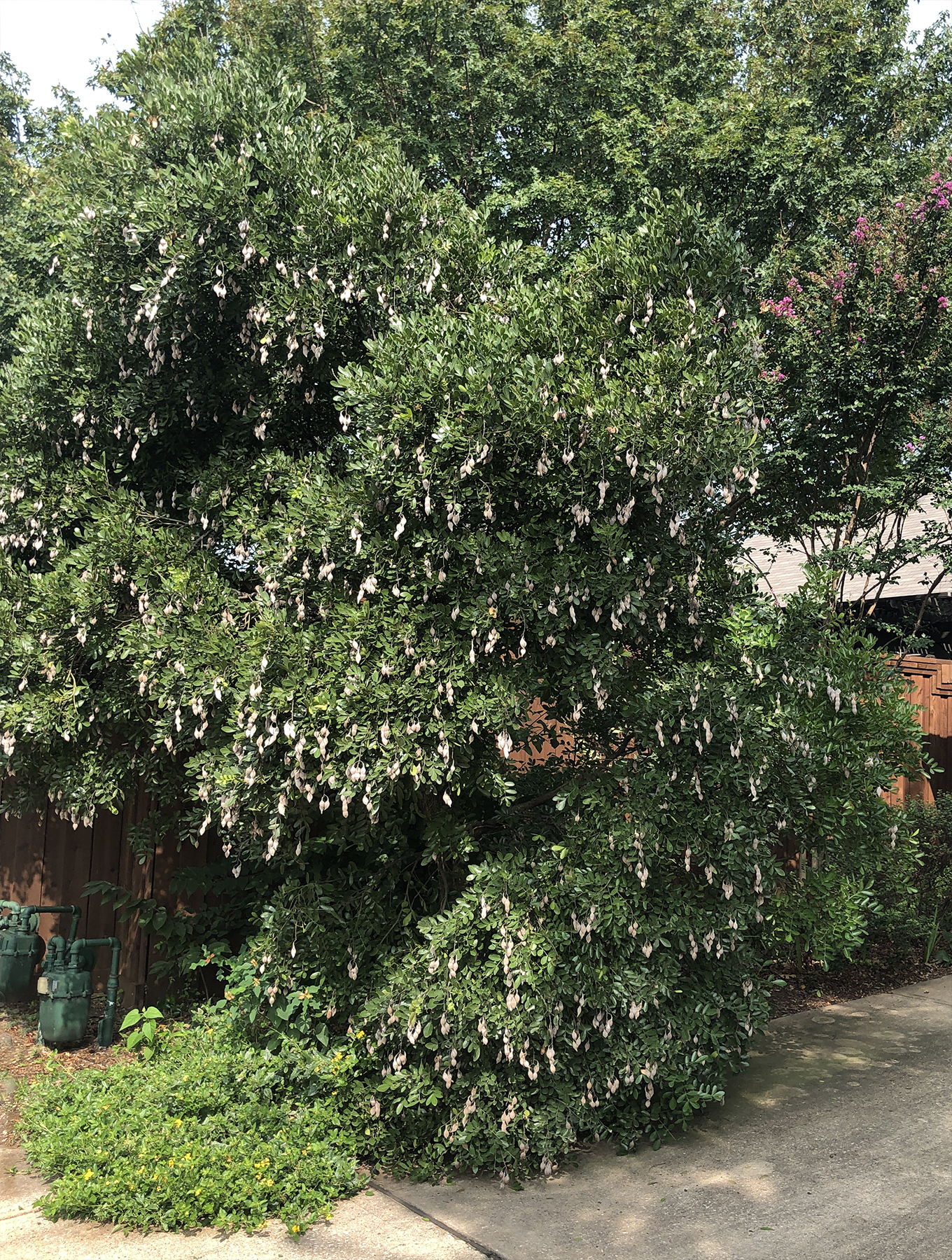 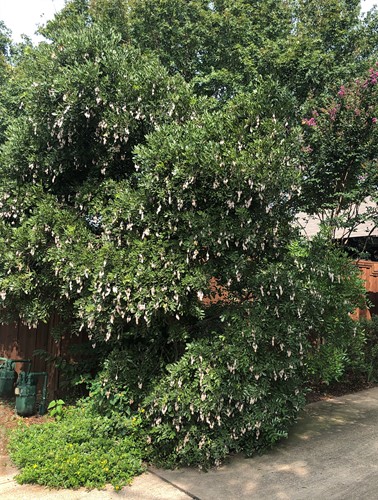 So how did my mountain laurel (Dermatophyllum secundiflorum) attain its impressive size? After all, these striking small trees are native to Central Texas, New Mexico and Mexico, not North Texas. They thrive in poor soils like limestone and caliche, and prefer drought, even desert conditions, to adequate rainfall. Truth be told, I had inadvertently provided a perfect microclimate — where the sun beats mercilessly on the drive and alleyway, where the sloping bed drains quickly and wind whips extra moisture from the soil, and where I never fertilize. That mountain laurel thinks it’s in Texas Hill Country — or the Chihuahuan Desert! And it rewards me with copious clusters of fragrant, blue-purple flowers each spring, picturesque pods in summer, and year-round evergreen beauty. 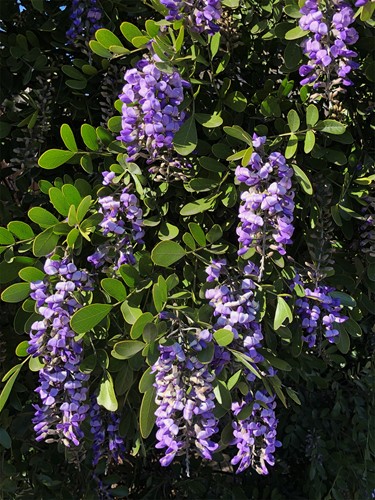 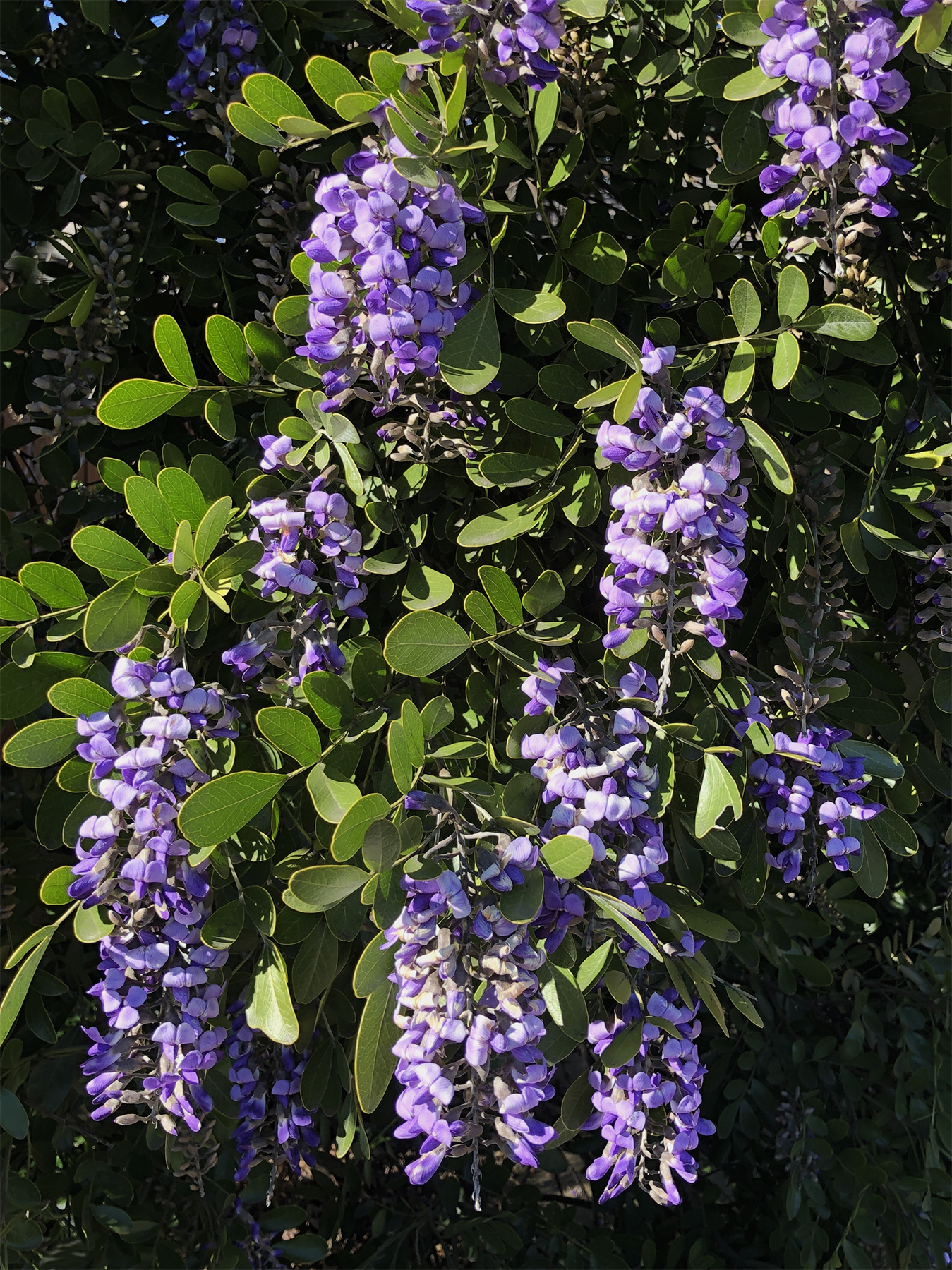 Barbara Damrosch could well have elaborated: Plants will tell you what they think — and want. Consider the rose that gets rangy as it reaches for more light, or the penstemons that multiply quickly where afternoon sun creeps in. Watch as Louisiana irises migrate further along the damp swale between houses. Rescue a friend’s sun-burned nandina and observe its happy response to just a bit more protection.

Of special note: Plant containers are part of the microclimate story, too. One year I lost many plants that I attempted to grow in a pair of large plastic pots that were “just the right color.” Now I’ve learned that BBC Broadcast Meteorologist Peter Gibbs has conducted tests placing thermometers in a range of soil-filled garden pots (“terracotta, glazed ceramic, black plastic, metal and glass pots,” reportedly). His experiment revealed startling differences in soil temperature on a hot day. The black plastic pots were veritably roasting the plants; the terracotta pots allowed evaporation — thus requiring the monitoring of moisture — but the soil temperature in them was as much as 15 degrees Celsius cooler. 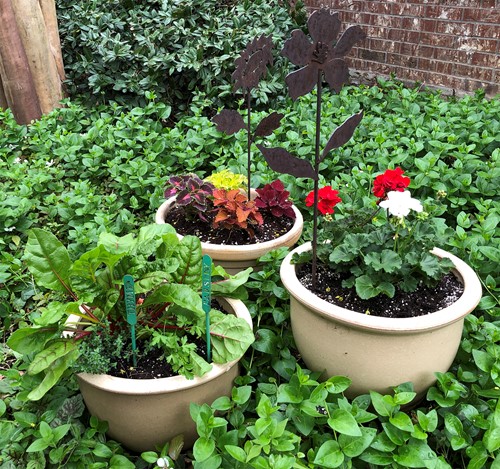 Containers are part of the microclimate story. Not all pots are equal!

So think like a plant, and celebrate when you succeed! I grew up in Houston and have fond memories of a fragrant tea olive in my mother’s garden. I knew that planting this classic Southern shrub (Osmanthus fragrans) in my McKinney garden was a risk; its winter-hardiness is limited to USDA Zones 8-11. But plant it I did — in a well-protected southeast corner, where the fence adjoins the house. When the big Texas ice storm struck in February 2021, I feared the loss of that handsome shrub. It was indeed hit hard — and has required judicious pruning — but it is alive and well. I count it a microclimate victory.

Let us help you with your gardening challenges or questions.

Have a question about program or event?